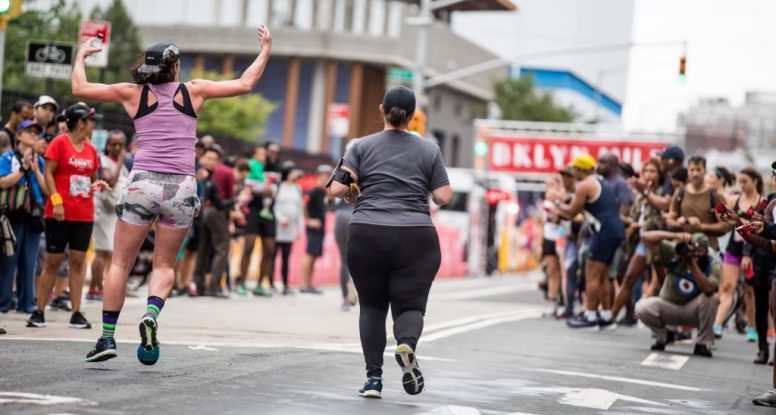 There have been so many incredible Brooklyn Mile moments over the years. Fortunately, photographer Ben Ko preserved forever one of the most special of those moments near the finish line of the Women’s Open wave in 2018.  Ben’s inspiring photo sequence is found below.  The runner was Christine Curran. In Christine’s words, she was a runner who never thought she could become one. The stranger who was cheering, urging and giving Christine the full send to the finish with unbridled energy is the always ebullient Jean Tinnelly (and Kelly Roberts, among other adoring instant fans).

Three years later, I tracked both Jean and Christine down to relive the moment.  The story I uncovered is yet another example of how the BKLYN MILE truly is for every possible type of runner: beginners, back of the packers, youth, masters, competitive amateurs and Olympians.

And for those runners who don’t even consider themselves one. 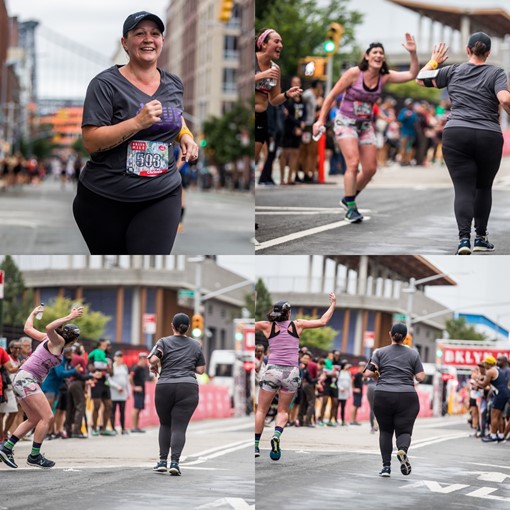 Born and raised in Queens, Christine Curran was surrounded by running her entire life; her dad was a marathon runner from his late 40s on. He started running when she was a child and was consistently trying to persuade her into piggybacking off of his own love of running. She tried time and time again to find her way into it, but with no luck. “I actually always hated running”, Christine said. But after having two kids four and a half years ago, she wanted to get back into shape and find a way to feel healthy again. Christine found herself craving something to do that was just for her – not for her kids, not for her husband, not for anyone else but her. She thought to herself, “I’m going to try this running thing again”, but it didn’t start out anywhere close to running a full mile.

“I was starting out at zero, actually, below zero. I was extremely overweight at the time and hadn’t done any physical activity in years. So I started out mostly with walking.” Christine bought a jogging stroller that she used to walk her two children all over Queens. Eventually, she brought them to a track near her house and would run laps with them before she built up the confidence to run in front of people out on the streets. After continuing to show up for herself over the course of a few months, Christine started to build strength (both mentally and physically) and that’s when she was able to start running on her own.

Out of the 200 women who finished the Women’s Open wave of the 2018 BKLYN MILE, Christine placed 192nd in a time of 11 minutes and 11 seconds. “You would think that running one mile is simple and easy but when you’re trying to really push yourself and you see all of these people way ahead of you, all of a sudden it seems a lot harder.”

In the photo sequence above, Christine was close to the finish and running out of steam. Christine didn’t know Jean Tinnelly (in the pink tank) at the time. But she certainly saw her, and heard her loudly and clearly. “I didn’t know her at all and I still don’t. That’s what was so awesome about it!” Christine vividly remembers Jean amping up the crowd and although it felt intimidating to have all eyes on her, it was incredibly motivating and kept her going through the line.

When we reached out to Jean about this photo she said, “The back of the packers don’t get enough love. I always try to stick around for as long as possible after races are done to cheer on my fellow runners.”

“That was definitely an exciting moment in my life, and it was a moment I’ll never forget,” Christine said. The moment proved to be transformational.

“A few years ago, I never would have thought that I could do something like what I did that day and what I’m continuing to do.” 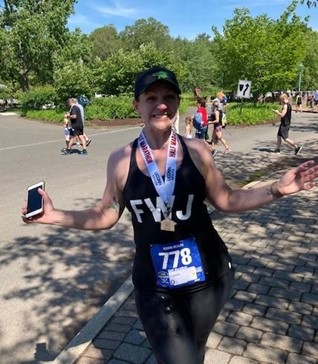 The Sky is the Limit

The following year at the 2019 BKLYN Mile, Christine made a huge leap of improvement, running nearly two minutes faster and recording a 9:35 mile finish time. That same year she later ran her first Half Marathon in Long Island.  Nearly three years later and in June of this year, Christine finished her second Half Marathon in Connecticut. Those 13.1 miles in CT were run at a faster pace per mile than her first 11 minute BKLYN MILE in 2018.  That’s insane progression.  These are the positive news stories we all need in our lives.

Christine plans to run the Long Island Half Marathon again this year in September, and her goal is -of course- to work on getting even faster and stronger. I asked Christine what her advice would be for someone that’s hesitant to run the BKLYN MILE because they may not think they’re fast or serious enough. She said, “Don’t think about speed, just focus on completing it. And especially with the Brooklyn Mile, it feels like a small community and you don’t feel like just one in a million people. I mean look at this woman who cheered for me, she didn’t know me from a hole in the wall, and yet there was this sense of comradery and this common goal of just running together in the neighborhood. I don’t think anyone should hesitate to do it. You might meet people that can help you to get even better and stronger and you’ll get motivated to do more. Don’t stop yourself, don’t limit yourself. A few years ago, I never would have thought that I could do something like what I did that day and what I’m continuing to do. Just get out there and do it. Start slow, start somewhere, start anywhere.”

Are you registered for the BKLYN MILE on August 8? Sign up now.

Register for the BKLYN MILE!