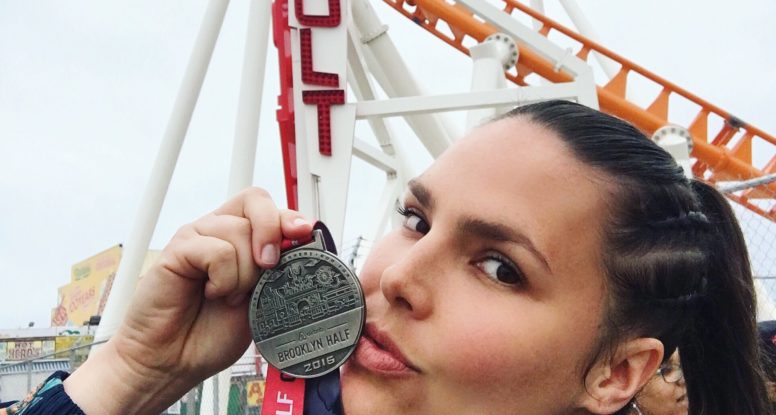 Model, designer, and body activist Candice Huffine is no stranger to the limelight, but a newfound passion for running has allowed her to find her voice outside of the fashion world. Candice, who was motivated to share her own running journey, founded the online community, Project Start.  Through Candice’s efforts, what began social media campaign has brought together thousands of veteran and new runners alike to share their stories, encouraging all women to just start!

By the way, after this interview… Candice finished her first Boston Marathon. Congratulations Candice! Enjoy! 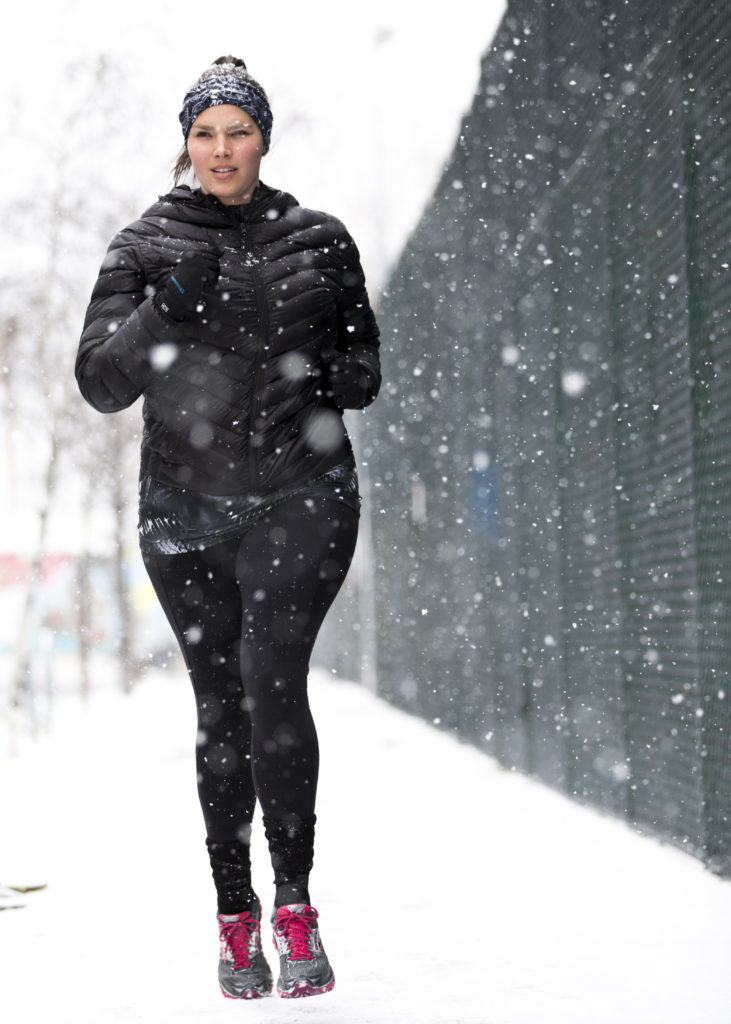 How did you get into modeling and how has it influenced your life and personal goals?

Modeling was ALWAYS a dream of mine. There was no backup plan for me.  I knew what I wanted, and took a trip to New York City at age 15 to find it. I was met with constant rejection because my body was not the ideal standard measurements revered for a model at the time. Nevertheless, I persisted. I ended up signing a contract as a plus size model, a path that would lead me to where I am today and give me a platform for spreading a message of body positivity and self-acceptance on an international scale.

The decision I made 17 years ago to sign that contract has influenced my life entirely and has truly made me the woman I am today.  I had a choice to lose unnecessary weight to reach those ideal measurements, or forge a path just as I was right then and there. I chose to be true to myself and that is a decision that set me up for how I would approach all opportunities moving forward. I have been able to thrive on being unapologetic, driven and vocal.  These are the characteristics that have allowed me to make a positive impact within both the fashion industry and the running community.

What’s your background with the sport of running? How did you get started?

I started my journey in running only a year and a half ago.  Growing up, I was active in sports, but avoided purely running as much as possible.  As an adult, I became more intrigued by it when my husband Matt Powers became more active in the NYC running scene. His involvement with November Project and NYRR races made the sport and community look so fun and exciting. I didn’t want to stand on the sidelines anymore, but I was frozen with fear to join in because I honestly just thought I couldn’t. I thought I would do it wrong, be too slow, or just be physically incapable. With a gentle push, Matt dared me one day to sign up for a half marathon and the rest is history.  I like to say, he got me on the right day – a day I decided to stop telling myself “I couldn’t” and changed it to “I will.” 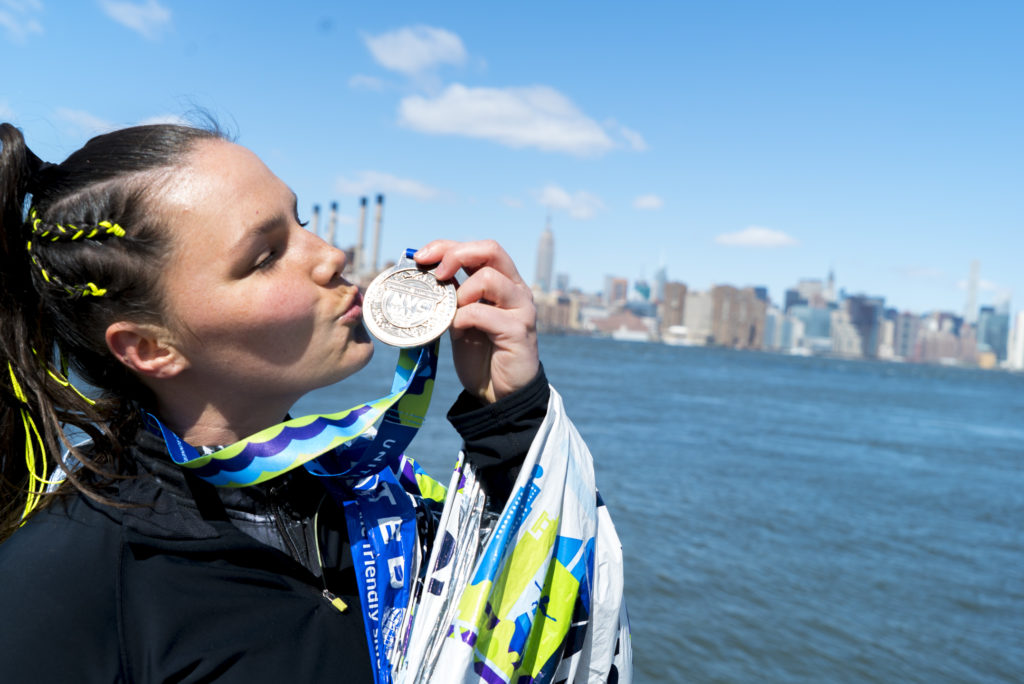 What’s been your motivation to run the Boston Marathon, and how’s the training been going?

I never imagined I would run Boston. I am still relatively new to running and had not embraced the marathon distance as a possibility (yet).  Then, I was invited to be a part of an all female team assembled by race sponsor Hyland’s. They were creating a viral campaign called Find Yourself, Find Your Finish Line in which each runner would share their full journey. Sharing my message became my motivation as it is something that has been very important to me as a runner. I threw caution to the wind and joined the team immediately so I could have the opportunity to show all women that they are capable of reaching any goal they set for themselves, that running is for every body, and to redefine what strength looks like.

Training has been…..training. haha. It’s been great and crappy all rolled into one. Sounds familiar right?? With that said, I have made a point to enjoy every moment of it and give credit to it for making me a better runner and person in general. The discipline and drive is something I now keep with me whether there is a race in the future or not. But I won’t miss my restless legs and sleepless nights. 😉

Can you tell us more about Project Start, how that started and what the message is behind it.

Once I actually let running in and committed, I realized how positively it impacted my life on so many levels and wanted to shout it from the rooftops.  I can say from experience that fear had held me back, and I knew I was not alone.  I wanted to create an initiative that inspired women to begin or even restart their journey with running. I wanted to share openly and honestly the beginning days of running, how everyone’s starting line looks different and how we are all capable. With that desire to share and lift a veil on the real side of running, Project Start was born. I called on 4 women (Alison Désir, Alison Feller, April Cargill, Kelly Roberts), who inspired me in my first experiences as a runner, to share their story of why they started, what they’ve learned, and what keeps them going.  Through these stories, Project Start’s community has grown and inspired women from all over the world to realize that they too are powerful. The mission is to let all women in on my favorite little secret, no matter where they are in their journey, that P.S. YOU GOT THIS! 😉

What’s your favorite running route in NYC or elsewhere?

Hands down, Central Park. Well also the Williamsburg Bridge too. Ok, I have two favorites. 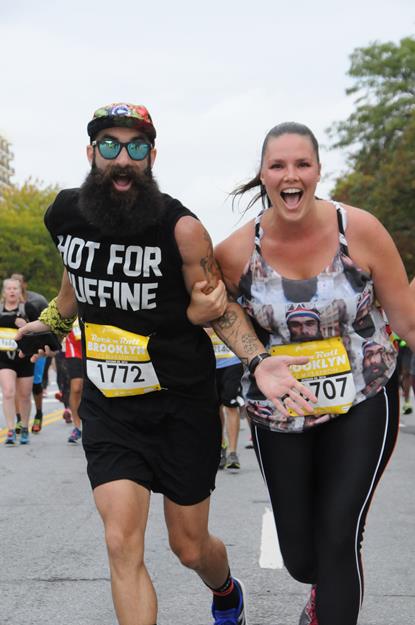