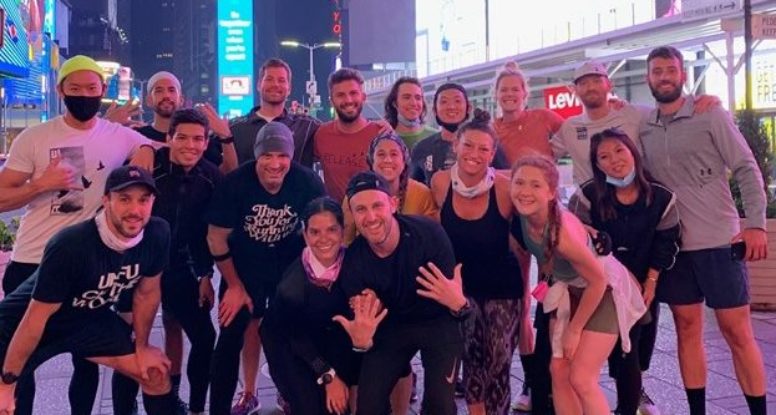 Picture this – you’re running through Times Square at 3 in the morning with 9 other people that you’ve been running with for the past 36 hours (some of which were total strangers prior), fueled by very little sleep, coconut water, RX bars and the occasional Shake Shack burger, all while feeling an overwhelming sense of mission and community. This is the story of a group of strangers that came together to run 48 miles and raise $20,000 while doing it.

If you’ve been running for a while, you’ve probably done a race for a charity at some point, but this NYC crew brought it to the next level – running 4 miles every 4 hours for 48 hours to raise money and awareness for drug and alcohol addiction. They completed the notorious 4x4x48 challenge that was created by Navy SEAL, ultrarunner and all around badass, David Goggins, in 2020 as a way to raise money for different charities all over the world.

The birth of an idea

The crew was brought together by a name you might know from recent reality show success, Zac Clark. Described by one of his friends and co-conspirators that I had the pleasure of speaking with, Andrew Schwartz, Clark is so much more than just the winner of the Bachelorette. “He’s always been this inspirational, larger than life guy with big ideas and an eagerness to bring the community together, he’s always been like this.”

The idea to pull off this challenge all started when Chris Chavez, Ryan Welsh and Zac Price began to run 5-10 miles together every weekend during the pandemic last year, as a way to find an escape in a world that was otherwise trapped indoors. When Clark was invited into the group, he floated the idea of attempting the Goggins Challenge. Price said, “It was really just a half-baked idea for a while until January when he got serious about it and started talking about weekends that would work for everyone. Out of nowhere, he put together a group text with other phone numbers that I’ve never seen before and texted us ‘Here are the dates, put a thumbs up or down if you’re willing to do it’ and that was it”. By this point, ten had volunteered to toe the starting line.

The resulting crew was built of local New Yorkers: Zac Clark, Chris Chavez, Cara Enright, Francisco Liuzzi, Zac Price, Andrew Schwartz, Greg Travers and Ryan Welsh, along with Alex Denstman, who is the Joint CEO of Ashley Addiction Treatment Center in Maryland, and Boston-local Izzy Seidel, sister to USA Olympian, Molly Seidel. They all knew that if they were going to run 48 miles in 48 hours, there would need to be both extrinsic and intrinsic motivation. The team wanted to make an impact that went beyond just pulling off this very challenging physical feat, and they did that by raising money for Release Recovery.

In 2017, Zac Clark founded Release Recovery, a sober living facility in Westchester County and since then it has opened two more locations in Manhattan and looks to expand their reach much further. These kinds of homes tend to come with a negative stigma, but the facilities are gorgeous and aim to change the way that recovery is viewed in today’s society.

As an additional way to both spark their own motivation and raise awareness, the team put out the bat signal for New York running community to come out to join their run at any point during their 48 hour streak, and to donate to the cause while they’re at it. They posted to their Instagram stories to gain some traction and with the help of both Clark’s and Chavez’s platform (who’s behind Citius Mag, Runner’s of NYC and Sports Illustrated reporting), the amount of people who showed up in the middle of the night was incredible. 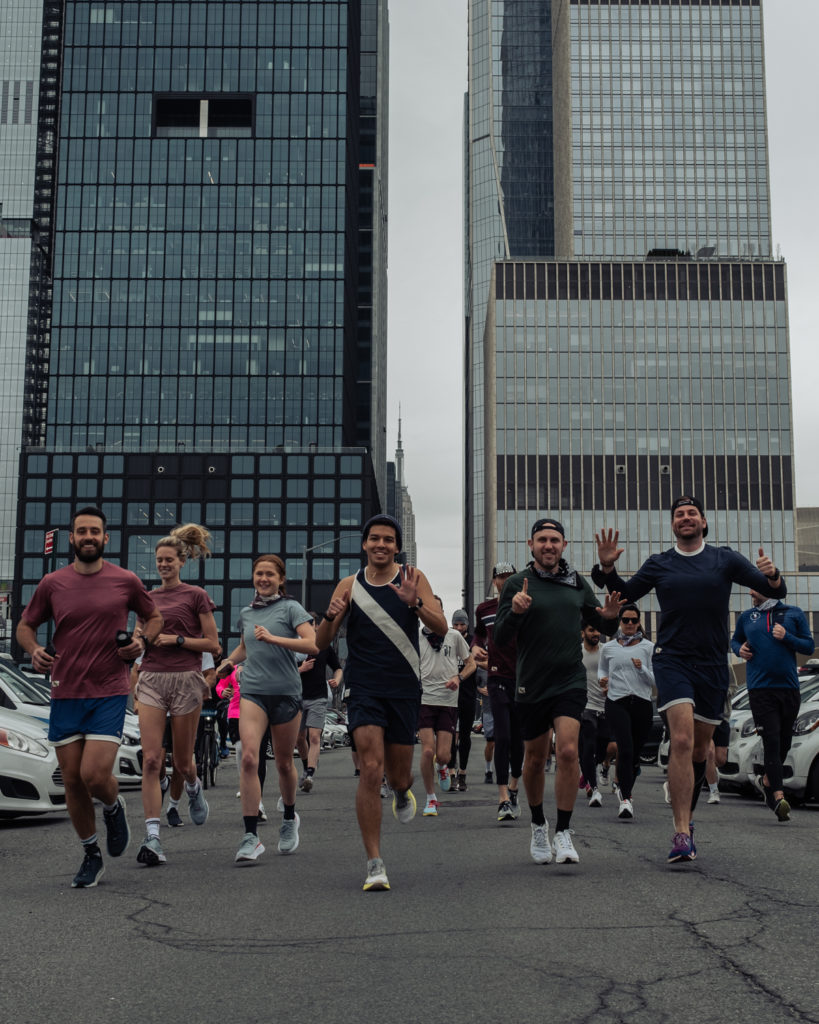 “When we stepped out of the Equinox Hotel that weekend, we just gave a head nod to each other like we all knew what was up. It was the culmination of all the time spent in this family-feeling group chat, and we all knew we were heading into something special that weekend” – Zac Price

Welsh told me that the run started out feeling like just a normal Friday evening run and dinner with friends. Things started to get tougher as the sun went down, but the energy was higher than ever as they all started to get to know each other better. After the first 11pm run, they all sat down to learn more about each other’s lives and realized that they were all making changes and taking leaps of faith in different ways – whether it was career changes, getting engaged, getting married, moving away. It was a point of great transition over the year for everyone, and that brought the group even closer together. Welsh himself got into running five years ago after going through a series of challenging life experiences and was blown away by the release it gave him mentally, “to say running has transformed my life, would be an understatement”. He ran this challenge alongside his fiancė, Cara Enright, who he met through the NYC running community.

On Saturday morning, the energy became electric. There were about 60-70 people that came out for every run and people started donating like crazy. Price said, “Whenever we all hit our separate breaking points, someone showed up for us. They would tell you the story of why they came and that they donated, and it kept us going.” There was no way anyone could have done this alone. “That was the first time that I felt really included in the New York running community, I don’t have to run alone anymore. These people brought me in like family”, Schwartz told me.

Price is a real estate broker and runner who’s been a New Yorker for the past twelve years and recently married his wife Ellen during the pandemic last year. At 3am on Sunday morning, she showed up to surprise him and the crew to run her fourth leg with them. This is when the iconic photo (pictured at the top of the article) was snapped. It depicts the core group, Price’s wife, Justin Gurland (partner at Release Recovery), and a group of random Columbia students who found the invitation to run on their Instagram discover feed, wanting to come out and make one last memory together before graduation. The image of people running together from so many different walks of life for a cause, posed in front of the cityscape of bright lights in the background perfectly encapsulates what this weekend was all about. 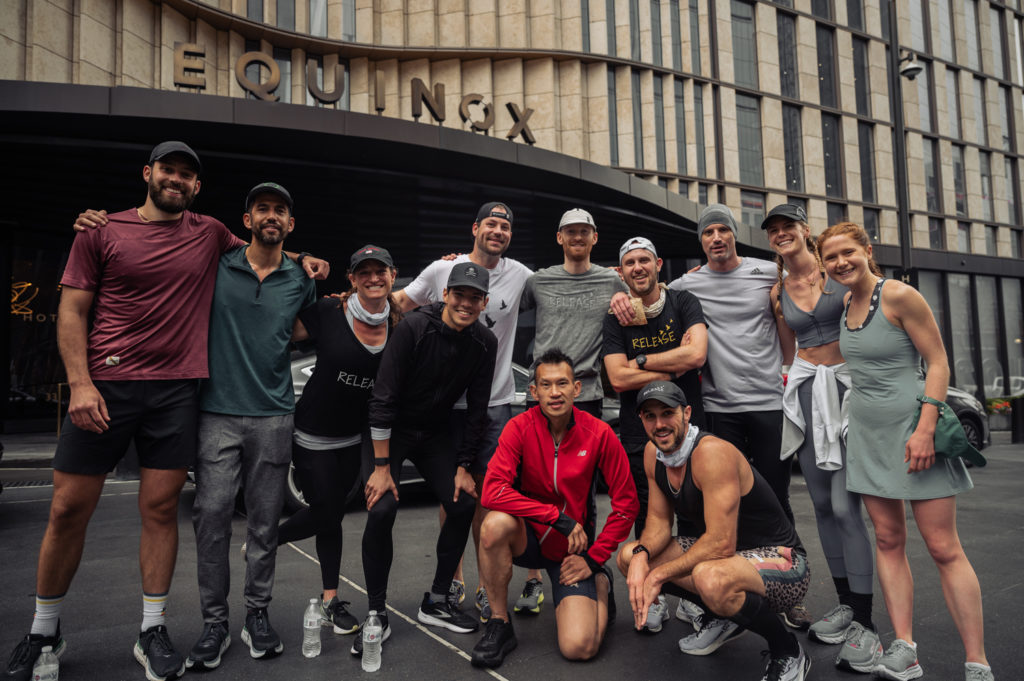 When it was over at noon on Sunday after logging Whoop data that was in the red from a lack of sleep, proper nutrition and meaningful physical recovery, it was a bittersweet celebration for the crew after building such a strong bond in such a short amount of time. 10 people started together and 10 people finished together. Chavez said that physically, it was a totally different experience than a marathon. It was a slow burn afterwards instead of immediate exhaustion after running full out for a few hours.

“Throughout our day to day lives, many of us have jobs, live in nice apartments, go out and do fun things, and I can’t really say that my back is against the wall. But during a long distance run like this, I can assure you that my back is against the wall and I’m going to have to find out what’s inside of me to fight. This was special because you had that feeling with a group of people and you weren’t alone in the fight, you had to pick each other up. When it was over, it was the first time I had hugged someone outside of my immediate family within the past year.” – Ryan Welsh

How you can get involved

The run happened at the perfect time as the New York Times had just come out with a study the day before on how addiction related deaths had taken a big jump in the past year during the pandemic – there were 86,000 deaths during the past 12 months. As a perfect example of the impact the team made, one person showed up to one of the crew’s runs that weekend, dealing with something and feeling lost and in need of help, and they were able to get help within 12 hours of the event’s conclusion.

Schwartz said that it’s about more than just raising money. It’s about publicly fighting the stigma of recovery and inspiring people to get moving. He said, “The running community is insane in New York City. I was blown away by the amount of people coming out to run with us. It was a party for the first time since pre-pandemic. We had the music going, we had one hundred people running with us, the camaraderie was unbelievable.” Schwartz himself got sober in 2016 which was the beginning of his transition and his way into running. He lost 85 pounds along the way, has run countless races, made friends within the community, and has never looked back. His main hope for anyone who reads this is that they get inspired – to sign up for that big race, to reach out to a friend that’s in need, or if you yourself need help, reach out to someone and get it. If you see something, say something.

Over $52,000 was raised for Release Recovery that weekend and the number continues to climb. If you feel so inclined, you can still donate here. The money is going directly towards scholarships for people in need to get into treatment.