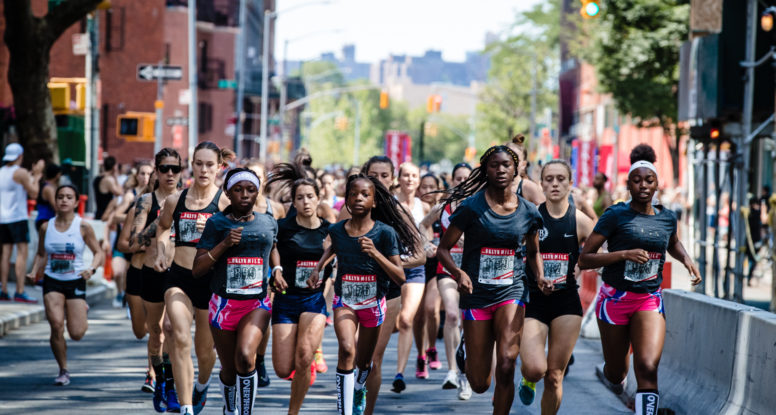 Jean Bell, was born and raised in Brooklyn, NY where she attended Erasmus Hall High School in Brooklyn and City College of New York (CUNY), in Harlem. She began running track in junior high school and competed at both the high school and college level. She then joined the Atoms Track Club of Brooklyn and began competing both locally and nationally. After attending Brooklyn Law School and graduating with a Juris Doctorate degree, she passed the New York State bar exam that same year and became a practicing attorney. She founded Jeuness Track Club in 1985.

Jean is joined in her noble community work by a number of wonderful Jeuness volunteer coaches including Karel Williams. We are awestruck by what this group has done for their athletes and the larger Brooklyn community for 35 years, and we are so appreciative of Jean taking the time to correspond with us. 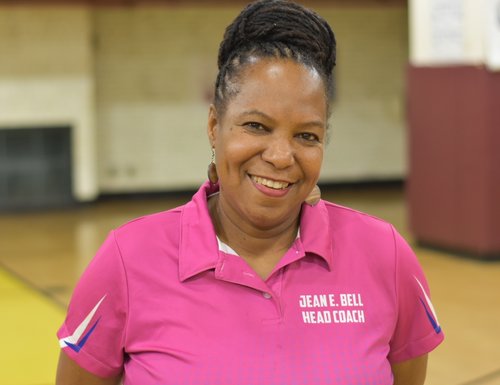 How did your experience growing up in Bed-Stuy shape your view of the world and more specifically, how did those experiences translate and evolve into your founding of the Jeuness Track Club?

I grew up in Bedford Stuyvesant in a low income housing project during the 1960s and 1970s. At that time there were so little opportunities for girls to take part in athletic activities. Through the Catholic school I attended, I began to take part in a track program that was being coached by my older brother. My younger sister and I loved to run and he recruited us immediately. Once I was in high school, I took over that Catholic school track program and coached it for 10 years. During that time I also began running with a women’s track program, known as “the Atoms track club.” This club was coached by Fred Thompson, a famous track coach in Brooklyn, who was an attorney by trade. He spoke to us often about the necessity of getting a higher education in order to bring ourselves out of the poverty of that community. He coached Olympic runners who grew up in Bed-Stuy and traveled all over the world. That made a powerful impact on me. I was able to attend college through the City University of New York, and subsequently was accepted into Brooklyn Law School. Once I graduated and started working I realized that I had talented younger runners on my Catholic school team, and made a decision to start my own club. I was no longer running, but wanted the same opportunities for the members of my team that I had been given. I used my knowledge of the club that I ran for to start Jeuness Track Club.

Please share with us the common profile and background of a young lady who runs with Jeuness. In the 35 years since founding this organization, how have you seen this Club be most impactful to these young ladies’ lives?

The girls who run for Jeuness, usually come from low income, single-parent households in Brooklyn. We look for girls who have not only a talent for running, but a desire to be part of something bigger than themselves. If you want to be a member of this club, you have to have mental toughness, as well as physical strength. When I first started the club, I was only interested in training the girls and taking them to track meets. After a while, I saw that they needed more from me, they needed direction and assistance. As I became more involved with their personal lives, I found that many of them and their parents needed my advice on many levels. I became not only the coach, but the social worker, the teacher, and the “therapist”. In the beginning, I was fully funding the club from my personal salary. As the team grew, this became more difficult. However, I was committed to helping individual members who could not afford the basic necessities to run. During this time I made higher education the ultimate goal for the girls. This is difficult when many of their parents do not have a higher education and have no concept of the pathway to a degree. As more athletic scholarships became available for women, it became easier to encourage members to see past their individual circumstances, and go to college. So many girls have gone on to better lives by continuing their education past high school. Of course, all girls do not continue with the team through high school, but as adults, they keep in touch with me and let me know how the team has impacted them and how they benefited from it.

It’s our understanding that this program is full circle in the sense that many of the athletes come back to coach and/or volunteer. That must be rewarding. What role have Club alumnae played in the continuing success of JTC?

I am always looking for new coaches who understand my vision. That is easiest when it is someone who came up through the program or was part of the program at some point in their lives. They understand what is important to me and to the girls on the team. We are all volunteers which shows that we are willing to give of our time and efforts to keep the club running. I have seven assistant coaches, one of which is my younger sister, and three that ran for me in the past. I believe that because I have club alumnae as part of my coaching staff, the club has been successful and long-running. We are all of the same mindset, and we all want the best for the girls. 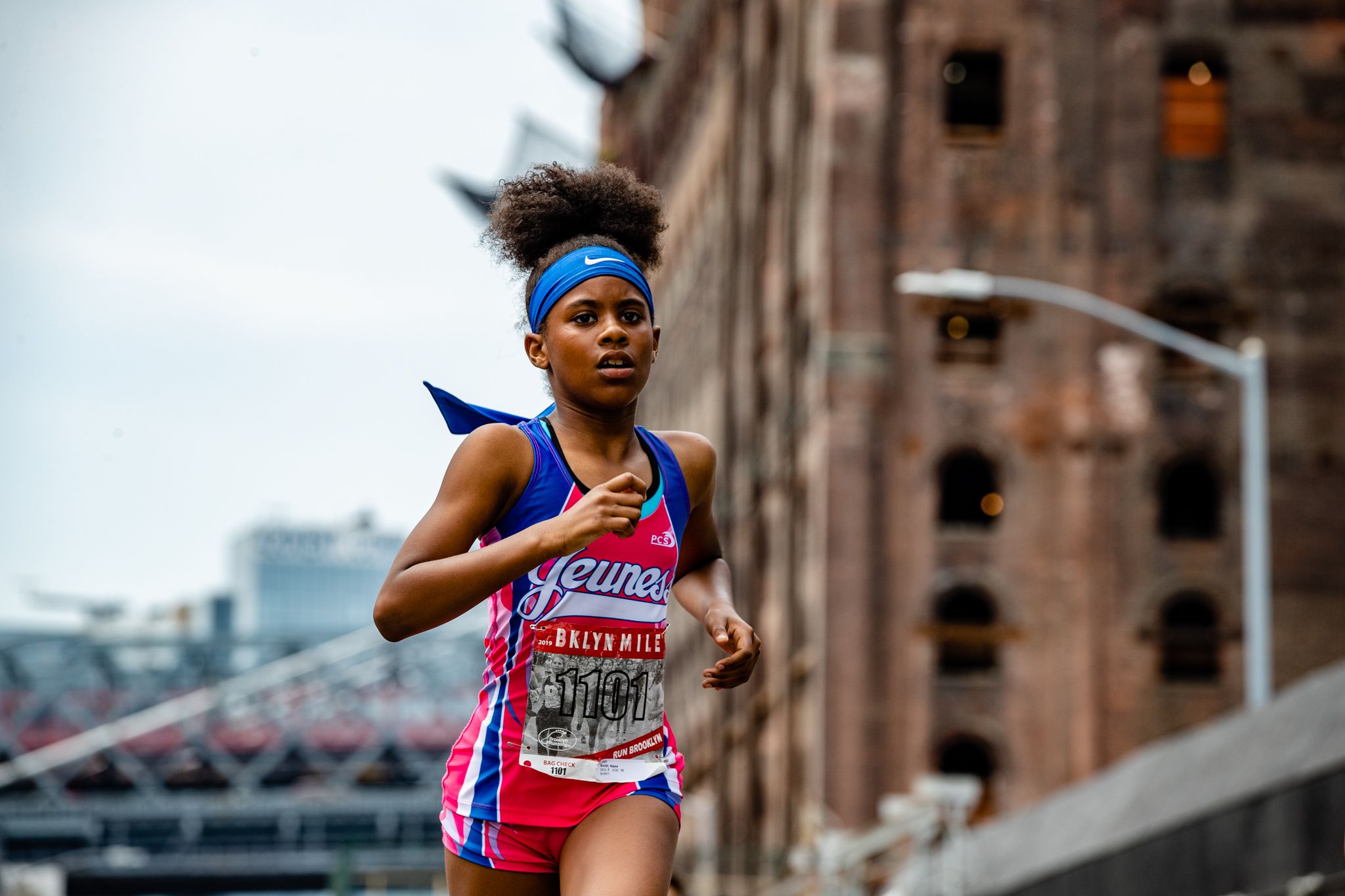 How have you been forced to adapt given the COVID-19 pandemic? Are the girls still finding ways to get together, work out and compete?

The coronavirus hit just as we were to begin our outdoor season in March 2020. At that time none of us knew the true impact that this would have. After several months of quarantine, I began to really miss the girls and the girls really missed the structure and consistency of track practice in their lives. I began to receive calls from the girls and their parents who wanted to know if there was any way that we could safely continue practice. I realized that I had three high school seniors who were not training and did not have the competition times needed to submit to college coaches. I set up a chat with the high school girls and gave them suggested workouts to do in their neighborhoods, and in their homes. I sent out emails to the parents of the younger girls with suggestions of ways that they could keep in shape in their homes.

By May 2020, I decided to contact the parents of the high school girls and give them the opportunity to come out to practice a few days a week in Long Island where I and my sister live. There were track fields that had opened to the public, and slowly but surely we began to take advantage of this. After a month and a half, I reached out to the other coaches who live in Brooklyn to see if we could safely break up the rest of the team into small sections, and train at different locations. The coaches were eager to get back to practice. We set up one practice schedule with coaches and locations for girls under age 9, and another practice schedule with coaches and locations for girls aged 10 to 13. My sister and I continued with the high school aged girls. Eventually, in September there were a few cross-country meets which were made available to us and the girls began running again. We are still training in this manner until the weather changes and we are shut down again. I am planning indoor exercises for girls to do at home once this happens. Hopefully, by Spring, we will be together again.

How have you been able to get so many young athletes to commit to the sport and perform at such a high level over the years? And how much do you think this relates to the neighborhoods from which they come?

I began running competitively when I was nine years old, but long before that I had a love of running. I find that people underestimate young girls and their ability to train at a high level even at the tender age of five. Running gives you a feeling of freedom and power. Any sport that you can do well, builds confidence and determination. When new girls come to the team, I explain to their parents that it is the athlete herself that has to be committed, and really want to work hard. As young girls become involved with the team, they see their teammates have a sense of purpose and dedication. It is very empowering for a young girl to see a team of young women being coached by female coaches who have a serious drive to excel at the sport. The neighborhoods that they come from have not changed so much from when I was young. They are still impoverished in some areas. The need to be part of something positive is fun and exciting. Girls who join the team soon realize that this is not for the faint of heart, and they rise to the challenge.

What are some of the values of the group, and how do they help foster excellence in the world outside of track & field?

The values of Jeuness Track Club, start with the name, meaning “young ladies” in French. Girls are expected to act in a dignified and respectful manner at all times. One cannot garner respect from others if you do not have respect for yourself. We, (the coaches) talk to the girls a lot about the value of their education, and how this will make a better life for them. We don’t just train the girls to run track, we teach them about life. We want them all to grow up to be mature educated young women who will have something to offer the world. It doesn’t have to be on a grand scale, but if you start with that goal in mind you never know where it will take you. Women in general, and African American women in particular, have not been held in high esteem in the history of this country and the world. We want the girls to know that they are powerful beyond measure, and one girl at a time we hope to change the opinion of male-dominated societies.

What’s next for you and for the Jeuness Track Club?

What is next? We will continue on as we have since 1985 when I started the club. There are always new faces, new stories, new athletes who want to be part of this story. I love being a part of the club as much as the girls do. They impact my life as much as I impact theirs. I did not foresee coaching the club for all these years when I first started out just wanting to have a track team. I wanted to give girls a chance to enjoy track and field as I had when I was young. It has turned out to be so much more. Who knows where this story will go from here! 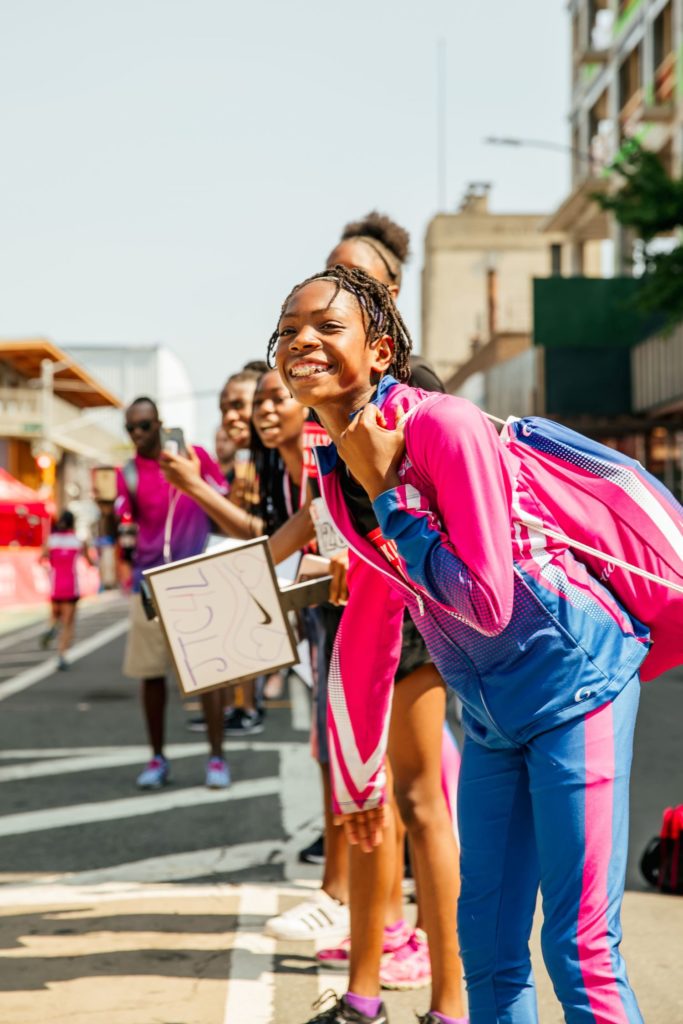