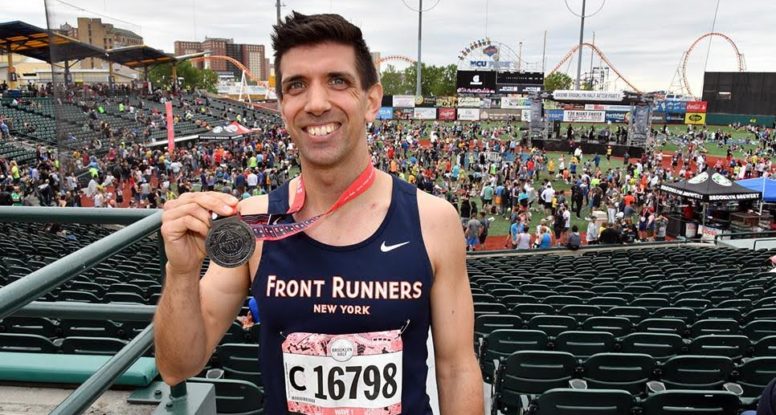 John Solano found his way into NYC’s running community through Front Runners New York, a running club for people who identify as lesbian, gay, bisexual, transgender, queer (LGBTQ+) and those who are allies. This year he is serving as Race Director for the 40th Annual FRNY LGBT Pride Run®.

The Call to Running

It runs in the family for John. Hailing from New York and being influenced by an uncle who was a track and field/cross country coach, John grew up running and competed all throughout high school. Moving back to NYC in 2016, he first joined Front Runners New York while looking for an opportunity to connect with people in a community built around the maintenance of a healthy lifestyle and finding acceptance. This enabled John to bring his authentic self to everything he did. After being smitten with running once again, John made a pact with his family that if he were able to obtain a spot in the 2017 Brooklyn Half, they would all be there on the boardwalk in Coney Island to see him finish. And it happened. From that point it was full speed ahead with racing in his adult running life.

“Although I identify as a gay man, I am also a cisgender white man. I have to be realistic in that it has been easier for me to organically fold into the greater running community because that’s generally more representative of who competes in road races in the five boroughs and across the country.”

When he first started to run with FRNY, John decided to join the Tuesday Fun Runs in Brooklyn where he works and lives. It was a novel concept for FRNY at the time, so when he showed up for his first group run, there was only one other person in attendance! He asked the Board for the contact information of all those that lived in Brooklyn and he reached out to each and every one of them. Since then, they’ve built it out so that 25-30 people show up every single Tuesday.

Being able to be on the front lines of this community building is what sparked his commitment to creating an inclusive space for runners with this team. He’s been with FRNY ever since and was recruited to be the Race Director of the Brooklyn Pride 5k in 2019 and 2020. He was part of the team during the pandemic when they had to move the event to a virtual race, but it still sold out. This year he’s serving as the Race Director for the 40th Annual FRNY LGBT Pride Run® in Central Park, happening this Saturday, June 26th.

“What motivated me to step into this role is just knowing that these groups are deeply needed.” John wants to remove any hurdles/obstacles for people to compete, like providing financial support for those who can’t afford to sign up for a race. This year, the Pride Run is partnering with New Alternatives who works with LGBTQ+ homeless youth in NYC’s five boroughs to provide them with prepared meals, hygiene products and mental health services.  “That’s the work that motivates me to create amazing race experiences for people – events where not only they have an amazing time, but the satisfaction of knowing that their race fees go directly to help these types of community-based organizations.” 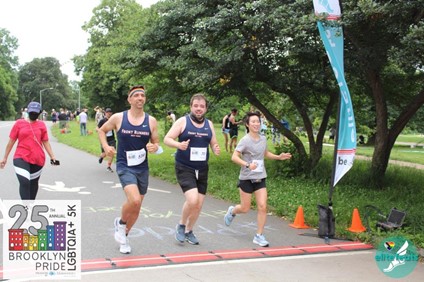 Inclusivity in the Running Community

“2016 was a year for me where I began to think about my own health, having previously struggled with drug use. To proudly identify as a gay man and wear the Front Runners singlet to every race I competed in really anchored me and it made me feel like I’m bringing my full authentic self into these spaces.” John still wears the very first Front Runners singlet that he purchased in 2016 to every race that he’s run in. They’ve updated their singlet several times, but he still holds on to his original because he remembers feeling an incredible sense of empowerment and belonging when he wore it for the first time.

When reflecting on his own experience with inclusion, John thinks heavily about the people that do not have it as easy, such as BIPOC or trans members of the community. “I personally believe that every single trans runner should be able to run according to their gender identity.” Traditionally, runners must categorize themselves as Male or Female when signing up for a race. One of the things that Front Runners did was push New York Road Runners to introduce a non-binary option when creating a member profile.

This year’s 2021 LGBT Pride Run is history making: it’s the first NYRR event where folks can identify as non-binary.

John strongly advocates that no matter how you identify, you are part of the running community. He argues another issue plaguing the running community at this time are state legislative bills -written or passed- that effectively exclude trans youth from competing in sport at any level. He thinks about the positive role sports has played in his life, and “to strategically exclude a group of people with the stroke of a pen because of how they identify and how they authentically bring themselves into the community is atrocious. There are plenty of great organizations, such as Athlete Ally, that are bringing this issue to light and working to create change.”

“I think about 2020 where every race that was organized was a virtual race. We did everything we could do to make it feel like you’re still part of a community, but no matter what, you were still running a race by yourself.” This year’s FRNY LGBT Pride Run is a hybrid event. There is a virtual 5k that people can register for free of charge for those that don’t feel comfortable coming into the city or back into a live race just yet. With the help of NYRR, the in-person option is a 6k race through Central Park, where capacity is almost full with a field of up to 4,250 finishers. There will be waves of runners taking off every 15 minutes from 7am-11am for the purpose of still committing to social distancing. John hopes that this race will not only feel celebratory where everyone is finally feeling confident coming back to racing, but also create a space where people can connect outside of the race itself.

How YOU Can Support the LGBTQ+ Community

John says, “In person racing is back – get involved and register. If you are still not comfortable there are other ways to get involved like supporting the work that we do, and the organizations that we want to highlight like New Alternatives. They are always looking for volunteers and rely both on monetary and in-kind donations. Look into how you can support the LGBTQ+ community even beyond New York City Pride Week. Even after June, think about how you can remain connected to the LGBTQ+ community. Pride is a 24/7/365 movement.”