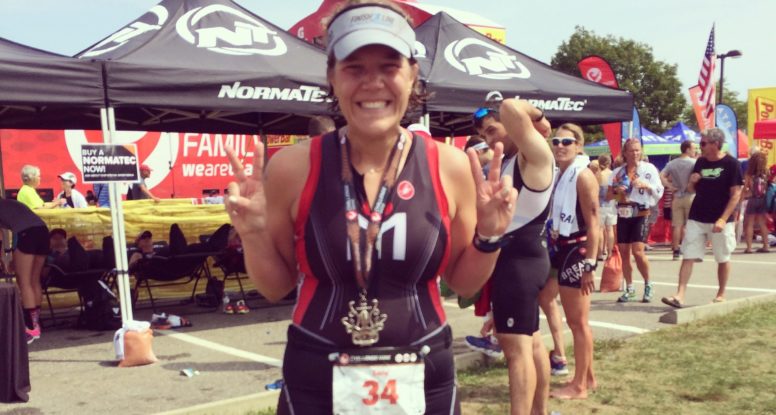 Sara Hunninghake is the Community Manager at Finish Line Physical Therapy and a licensed massage therapist. She graduated from the LMT program at the Swedish Institute, and is also recognized as a Fellow of Applied Functional Science from the Gray Institute. Prior to joining the FLPT staff in 2011, Sara worked in a media operations role for such organizations as USA Swimming and New York Road Runners.

Sara is an avid endurance athlete, having completed six marathons and two half-ironman triathlons. In addition to running her first Boston Marathon in 2017, she is also training for Ironman Lake Placid.

What is the mission of Finish Line PT, beyond just providing excellent care and physical therapy for runners and other athletes?

Our number one goal is always to help our patients see results from physical therapy. You have a knee injury and aren’t sure if you’ll be able to run the New York City Marathon? We will do everything possible to get you to the finish line. Period.

But what drives us more than anything is a sense of community – creating it, cultivating it and investing in the greater New York City running and endurance community. People realize pretty quickly when they first come to our office that this isn’t your typical PT clinic (we’ve got a ping pong table for heaven’s sake!).

When Michael Conlon started Finish Line more than 10 years ago, he wanted it to be different from other PT clinics he’d worked at in the past, both in the treatment philosophy and in how he supported charity programs, running groups, triathlon teams, etc, at the grassroots level. This remains a cornerstone of our approach today, even now that we have two locations, 12 PTs and a staff of 25. It’s part of what attracted me to Finish Line as a patient back in 2008—and what’s kept me involved since then. I am innately the type of person who seeks to create community, so when I realized this could be my full-time job? Let’s just say, it didn’t take a lot to convince me. 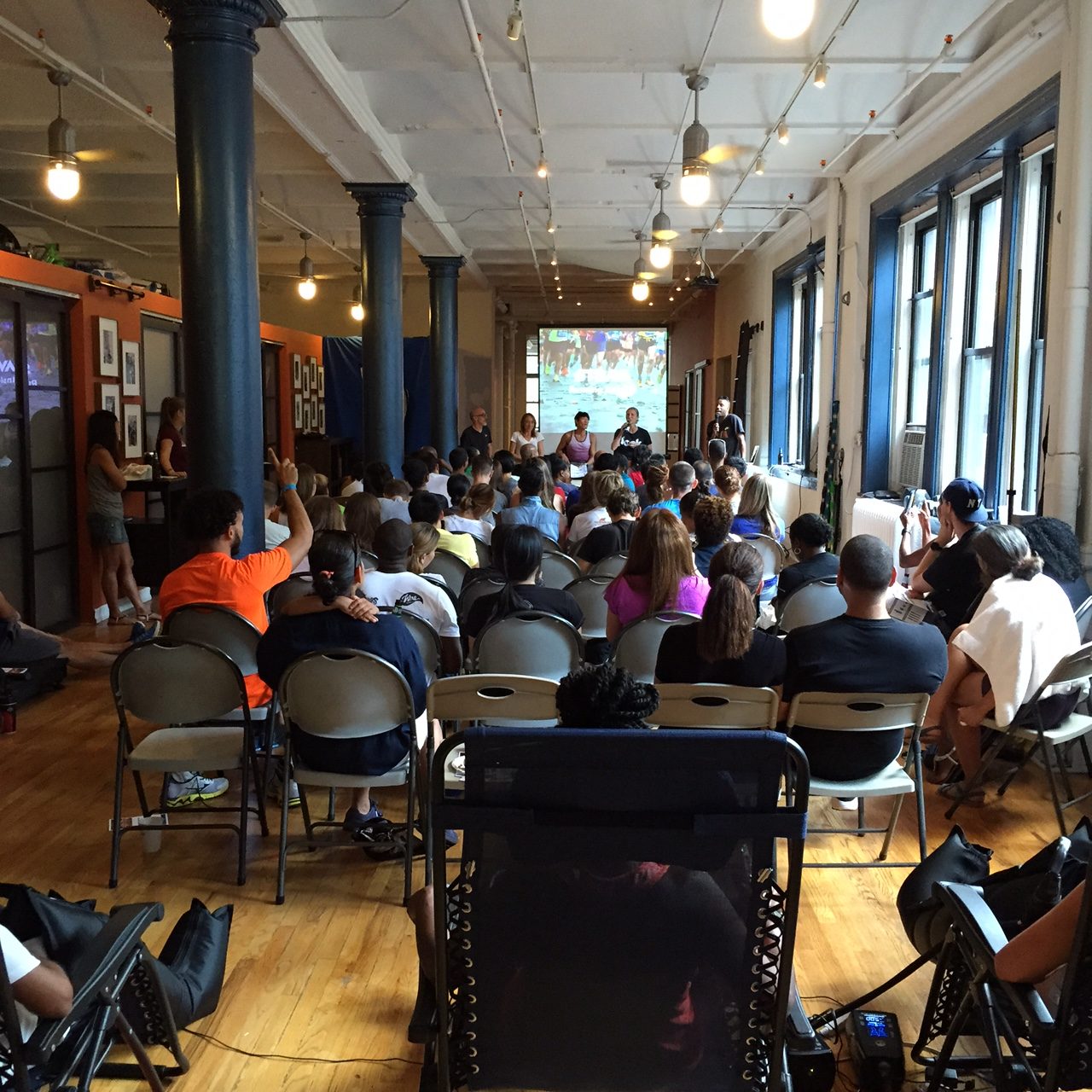 You’ve been a part of some pretty high profile events – the Olympic Games, adidas Grand Prix, and The Millrose Games to name a few, what are the factors that really make a great race or competition? Feel free to answer both as an athlete and as a member of the media.

I competed on the 2008 Olympic team in table tennis, and, what can I say about that experience?? Nothing, in fact – I’ve never competed at any of those events as an athlete, although I’m flattered you’d think it was possible (you’d be surprised how often I get that question). I worked at these events in a media/event operations role, which was my first career before transitioning to Finish Line PT and becoming a massage therapist. (I’m the one athletes always find annoying because I ask them to stop for interviews right after their races – see picture of me asking Michael Phelps to do interviews at the 2016 Olympic Games).

Working events isn’t always glamorous, but it is incredibly fulfilling and really fun. I grew up loving the Olympics—my family watched every minute of the swimming and track & field—so to have the opportunity to have a front row seat at five Olympic Games for some great moments in history has been amazing.

From the event side, I could give you a laundry list of things that make a great competition. But that stuff is boring! Even though there’s an unwritten rule about always being unbiased when working with the media, I can’t help but always watch races as fan first. And I love it when there’s a good story. This past summer in Rio, I was so excited when Anthony Ervin won the gold medal in the 50-meter freestyle race at age 35—16 years after tying for gold at the Sydney Olympics. Such a good story!

It’s truly special to watch some of the all-time greats. I’ve known Michael Phelps for a long time, but watching him race is always exciting. The way he moves through water—and his competitive spirit—is inspiring. I’ve seen Usain Bolt race a few times now; he’s such an entertainer, you can’t help but love him. And he’s so damn fast. 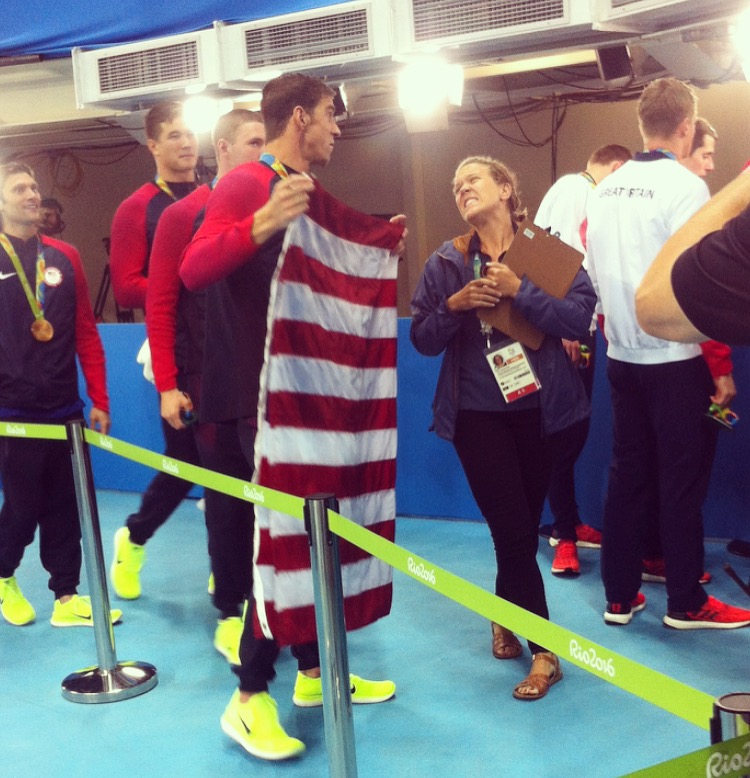 Where is your favorite place to run?

I’m a Brooklyn girl, so I’m partial to Prospect Park. It’s a little piece of heaven in the city. For the 10 years I’ve lived in New York, that 3.35-mile loop (and every variation within the park) has been my favorite place to process my greatest joys, deepest sorrows and everything in between. I will also say, there’s something pretty special about the run commute over the Brooklyn Bridge. That view is one I never get tired of (but only before 8:30 a.m. – after that, it’s too crowded with tourists taking selfies!).

Given your role over the years as a Running Community Organizer, so to speak, do you foresee a transition into politics at some point?

Ha! That is a terrifying thought. I think I’ll leave that one alone – although even the running community can get political at times!

How have you seen the NYC running community evolve from your time working at NYRR until now? Where do you see it headed?

It’s remarkable how the community has evolved. NYRR remains one of—if not the—most important influences and voices, both in NYC and in the sport overall.

But running culture has changed. A new, refreshing energy is coming less from the established running clubs and formal races, and more from crews, rogue races and city running. We’ve been more involved with a few crew & races this year—Harlem Run, Black Roses NYC, Take the Bridge to name a few—that are examples of this shift. In different spheres of the city, they’re all pushing the envelope and doing some cool stuff.

This has also challenged us in thinking outside the box in how Finish Line integrates our pillars of prehab, rehab and recovery within this new segment of the community. One of the coolest events we did this year was a guided meditation/recovery session in collaboration with District Vision a couple of days before the NYC Marathon. We brought in a few pairs of Normatec compression sleeves to a suite at the Mercer Hotel, and the guys from DV led participants through a short meditation while in the sleeves. It was amazing; we never would have thought the meditation could add such a powerful layer to the recovery process. But it’s an example of a new level of integration that’s happening that’s energizing. There will always be a place for the formal and established, but I think the informal and new is bringing in a new population of runners, and that is exciting. 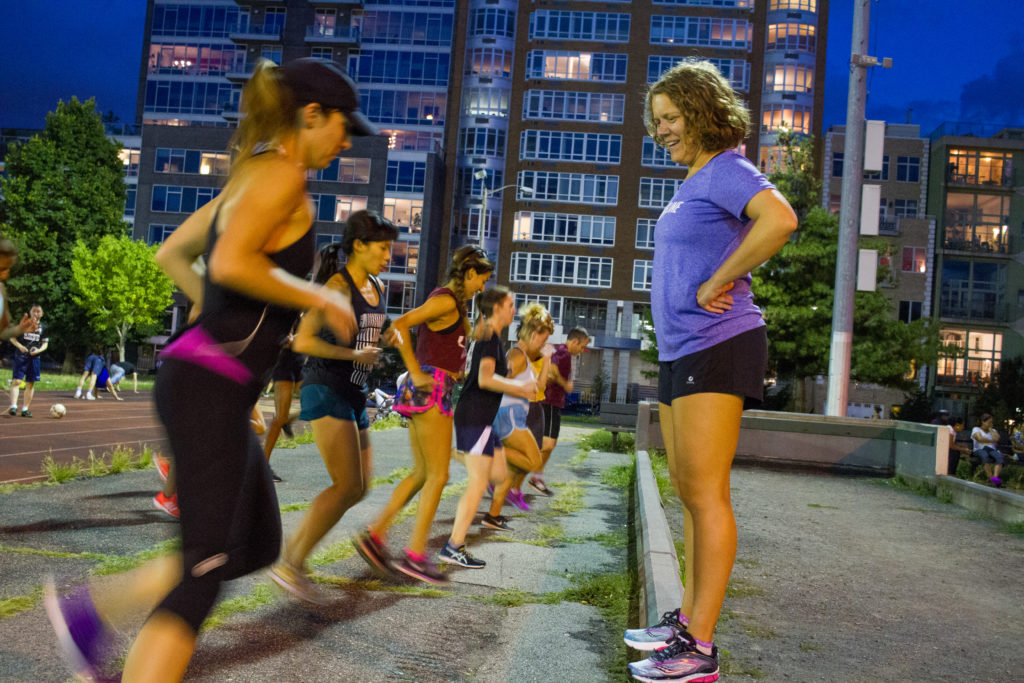 How does your knowledge of massage therapy influence your own training, and what advice do you have regarding massage in the training & recovery process?

Having worked at Finish Line for the past five years—and been influenced by all of our amazing PTs—there is no doubt that I am a completely different massage therapist and athlete than when I first started. I am much more aware of the role self-maintenance plays in the training process (even though I still hate foam rolling). My coach told me recently that I had the day off from training, but I did not have the day off from being an athlete. I loved that. It’s such a good reminder that it’s all about the small things you do on a daily basis throughout the training cycle—foam rolling, dynamic stretching, nutrition, hydration, sleep—that will ultimately help you be successful on race day.

I think massage is an underrated part of the training and recovery process; most people put it in the “nice to have” category. It’s something you do once or twice a year because your mom gave you a gift certificate. But when it comes to endurance training, I’d argue that regular soft tissue work should be part of your training plan. Getting massage that emphasizes functional soft tissue therapy even once a month throughout a training cycle (plus regular self-maintenance work) will help you prevent injury and reverse the repetitive stress of training.

The key is targeted soft tissue work – the kind of deep tissue, really get-in-there-and-clear-stuff-out kind of massage that hurts so good (my friend calls me the foam roller that you can’t stop). I worked with a triathlete a few years ago who was training for an Ironman. He’d come in every two weeks, always first-thing in the morning on Mondays, which was his recovery day. During his first session, after about 15 minutes, all of a sudden he blurts out, “This is NOT relaxing.” I couldn’t help but laugh! It’s not necessarily meant to be! The goal is to really release the soft tissue restrictions that often cause pain and inhibit movement. So while it might not feel awesome in the moment, I want people feel great within a day or two (and beyond).