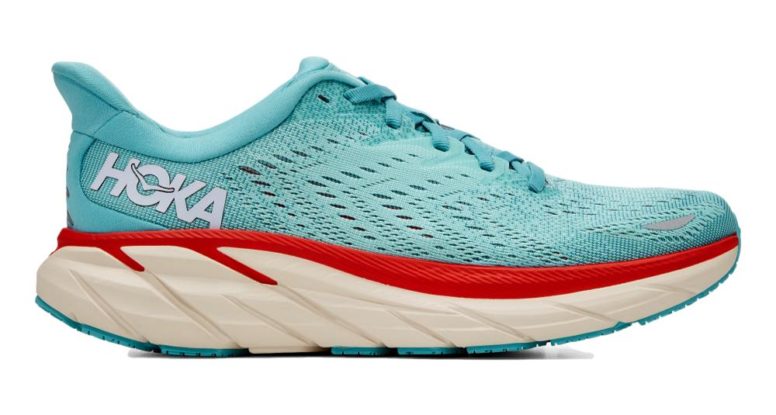 On June 1st, Hoka One One released a new version of their most popular shoe – the Clifton. How does v8 stack up with previous versions? I took them for a road test and spoke with the fitting experts at the Brooklyn Running Company to learn more.

The Evolution of the Clifton

Hoka One One was founded back in 2009 and stuck out of the pack like a sore thumb with maximalist cushioning when minimalism was all the rage. “Our original goal was to improve endurance race times by designing a shoe to go downhill faster. In doing so, we inadvertently reinvented the running shoe”, say their two French co-founders. The brand grew quickly from nothing over the course of 12 years into a beloved brand with loyal fans and skyrocketing sales figures, especially since the pandemic.

The Hoka Clifton shoe model debuted in 2014. Every time Hoka updates a model, they kickstart the process by collecting feedback and data 18 months prior to production. They take a 360 degree view and analyze how they can make their shoe even better, looking at every aspect of the shoe, both big and small in order to zero in on how they can optimize the wear experience for every foot that it touches. After the first draft of the design, they go through multiple prototypes to get every element just right before hitting go on production. 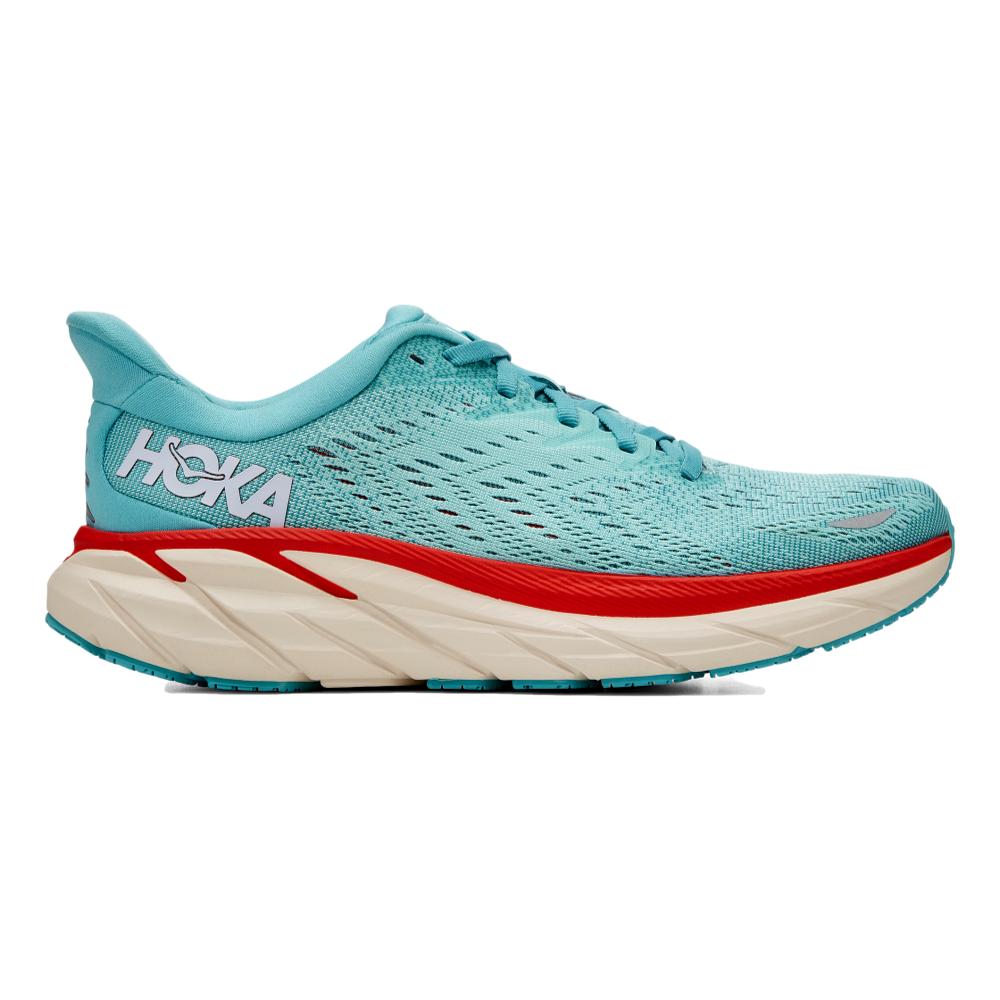 Steve Crnic, General Manager at Brooklyn Running Co. says, “Historically, the Clifton has been one of our quickest rising shoes, they’ve really taken off in popularity since the Clifton 6. With this version, it looks like they’ve dialed in on the fit and the cushioning profile. A lot of people like how cushioned they are, yet supportive. It doesn’t feel like a sloppy ride at all – they smoothly guide your foot forward and move you into the rolling motion that you need, but cushion you enough so that you don’t feel as much of the impact on the ground.”

My first impression was just how lightweight they were. I’ve been running in the Clifton since v4 came out and this was the first time I was really taken aback by the weight (or lack thereof). They weigh in at 7.6 ounces for a women’s size 7 and are 15% lighter than previous editions.  I was happy to discover this as it’s something I’ve been craving out of the shoe, having run more tempo and interval runs in lighter weight shoes. Something worth mentioning is that I’ve felt comfortable getting a size 8.5 with every prior Clifton that I’ve purchased, but I do think I could have gone with an 8 for this version. The fit of any shoe tends to change year over year with all brands, which is why I would recommend stopping in to one of the Brooklyn shops to test them out before purchasing.

“Overall I’d say that the fit of the upper feels very different, but in good ways. Both the tongue and areas that surround your instep of the foot are just more plush.” says Kellen Bulger, fitting expert at Brooklyn Running Company. “It’s still a Clifton so it doesn’t fit narrow (especially in the toe box), but the more plush upper hugs your mid foot better. Under the foot, the shoe feels lower-profile than usual, but the toe off is still quick like any other Clifton in the series has felt.”

Latoya Shauntay Snell, ultra runner, founder of Running Fat Chef, and journalist says, “The new HOKA ONE ONE Clifton 8s are just as dope as the Clifton 7s but a bit more responsive. Although HOKA is already known for its lightweight, it’s actually a tad bit lighter. I am transitioning back into longer distances again since being out for a year due to my fears of the COVID-19 pandemic and having those elements helped. Since HOKA ONE ONE brought out the extended hell and the tab in the back to make it easier to put on and off your shoe, I find it exceptionally helpful when I have sciatica flares and I opt for a speed walk instead of a run. Although this might be a huge thing to many, I am in LOVE with the new color palettes. The colors are gorgeous and vibrant. I’ve had my Clifton 8s a few weeks prior to the release and I can say that they are a bit more durable than previous editions.”

Additionally, there is a bit more rubber coverage on the outsole to increase durability and last you even longer. 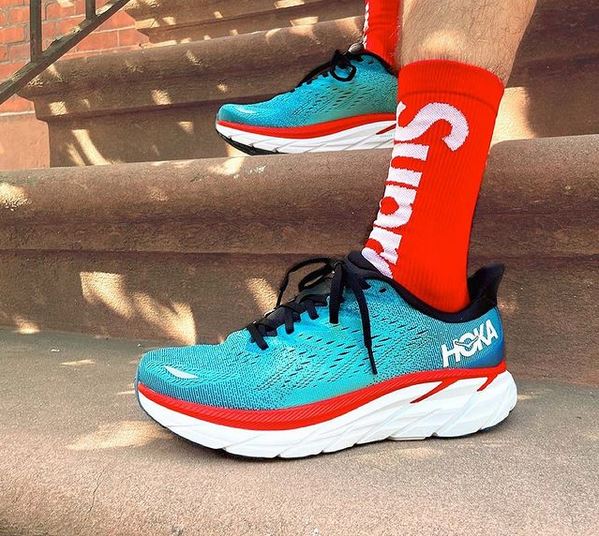 When Should You Wear the Hoka Clifton 8?

I took them out for a spin on a Saturday morning long run on the roads in Central Park around the famed –and since renamed– 6 mile Ted Corbitt Loop, and then back into the city streets to complete my 7 mile run. I had some heavy mileage coming up in the days proceeding, so I was looking to keep an easy, smooth pace. They were perfect for what I needed them for, to keep me going strong and steady on hilly and uneven terrain.

Latoya says, “The HOKA ONE ONE Clifton 8s are perfect for tempo and long runs. They’re cushioned and responsive enough to handle longer times on your feet — and I humbly say this a slower paced back of the pack runner. The longer that we’re on our feet, our bodies fatigue over time, even when we’re properly hydrated and nourished. When I go for longer distances, I feel like the Clifton 8s are my best way to go to hold me down for hours at a time. In terms of location, I could run on any pavement in NYC with the Clifton 8s but I prefer places like Brooklyn Bridge Park, the West Side Highway or across any of the major bridges in NYC like the Williamsburg, Brooklyn and Manahattan Bridge bike and run paths. They are exceptionally helpful for long runs. I tend to wear the HOKA ONE ONE Arahi 5s on my easy and tempo runs or on days that I’m cross training. The Clifton 8s are better for dedicated runs in my case.”

Bulger tells us, “They still have a mixture of bouncy and soft that makes these so popular amongst not just runners, but people walking as well.” And Crnic comments on how they are a really versatile shoe due to how lightweight they are. “You can do easy runs, long runs, even some tempo and speed work would feel great. It’s a great shoe to have in your tool kit.”

The men’s and women’s Hoka Clifton 8 is available in the Brooklyn Running Company’s Williamsburg and Park Slope locations and can be shopped online. The team is standing by seven days a week and monitoring the chat function so feel free to ask them any questions that may come to mind.

Shop the Hoka One One Clifton 8 now! 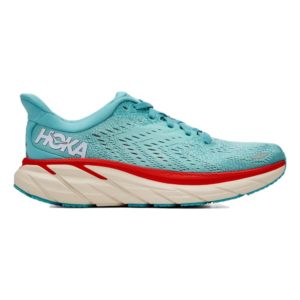